Once I was happy with the drive system, I decided to mount the electronics more permanently.  I decided to keep as much of the interior area as clear as I can to allow for future additions.  I will have to route the cables carefully from side to side but that shouldn't be a problem. 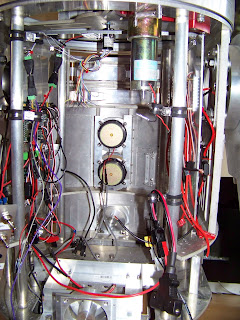 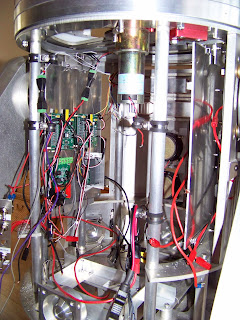 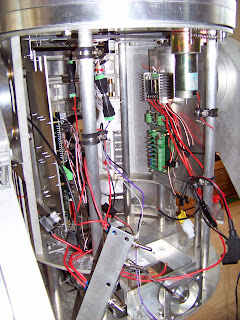 I need to finish up the body panels and dome hinges before R2 is fully stripped down for painting.
Posted by Unknown at 12:04 No comments:

Once again, I've been sadly lacking in updating my blog.

My R2 was stripped down while I worked on the drive system for the feet.  While he was apart, I got swamped in all of the things I needed to do and struggled to get the order of jobs in my head.  My wife, Julianne told me to get him put together so that the parts weren't littered all over the house and it gave me the push I needed to get some things done.
I knew that before I built him back up again, I needed to mount the rear power coupler to the base plate of the frame which I would be unable to do once he was together again.  This took no time at all as I knew what was required from fitting the front one months ago.
I then built hi up quite quickly.  I then sought the help of an electronics guy at a local Maplins shop who gave me some pointers into cables and other items to do with the drive system.
I had to drill holes in the feet and the ankles to pass the wires up from the motors in the feet, through the legs and into the body. 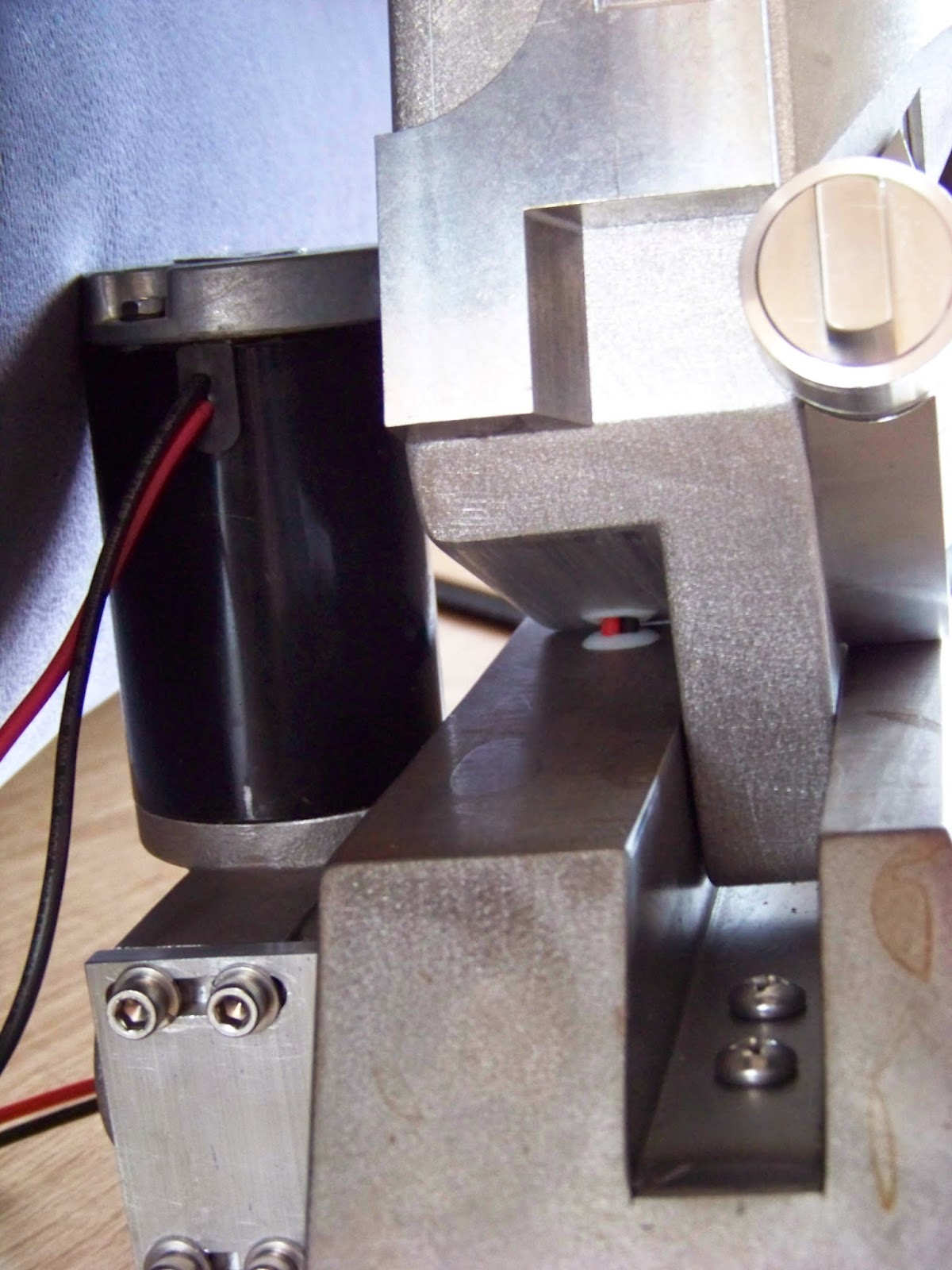 Once together, I hooked up the drive system, the dome motor, soldered the slip ring connector boards and tested him out.


Once I got the wiring sorted for the dome and temporarily fitted the front door panels, he looked a lot better.

So, next up I'm going the mount the front Octagon port onto the inner skin and have a crack at mounting the hinges for the door panels so that the front skins get closer to completion. 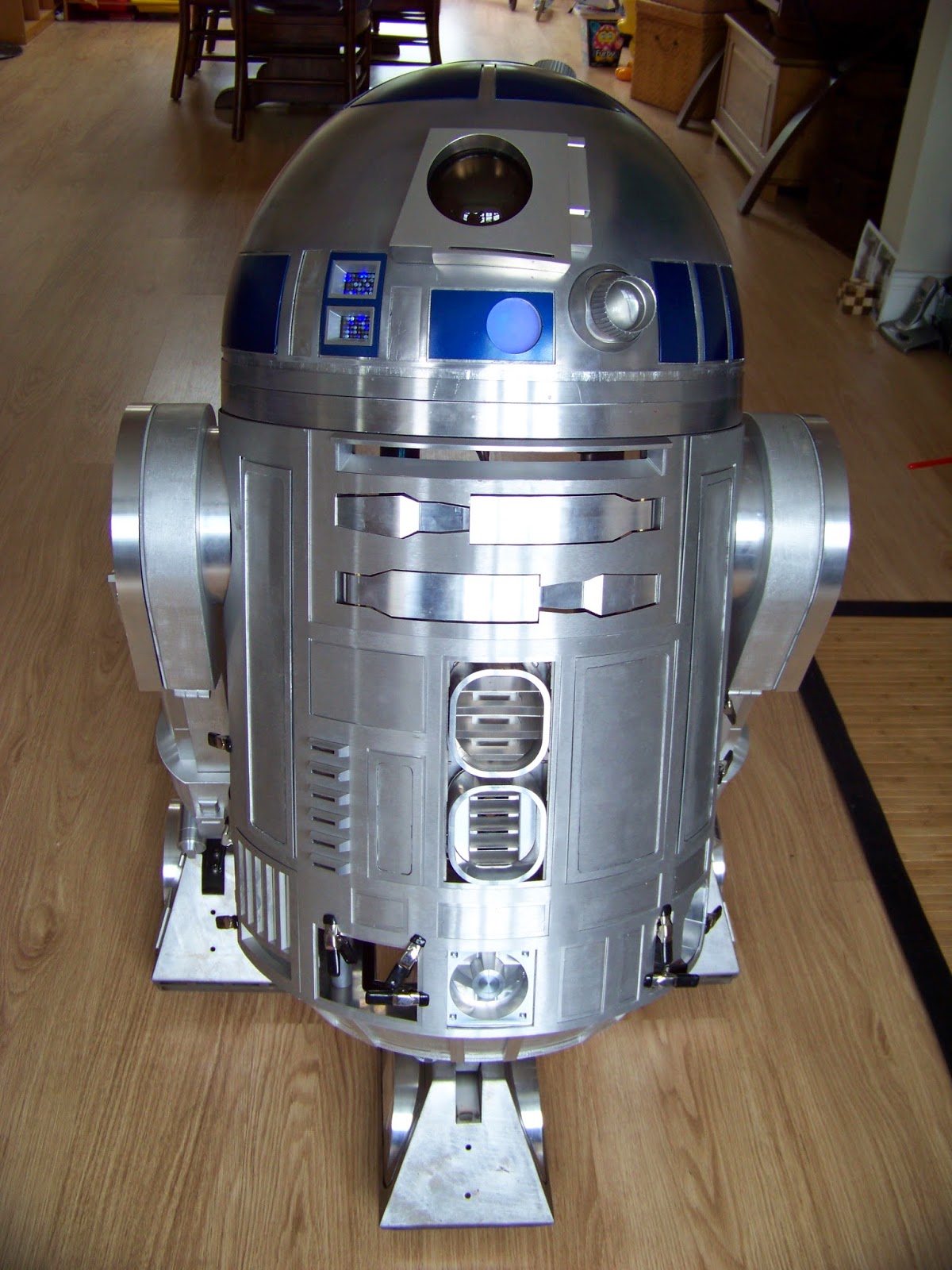 I haven't been on here for a while but I know some people are still looking.  I've been working on the feet and some of the dome.  The drive motors are fitted in the feet and the dome lights are fitted.  R2 has been built and stands on his own but is now stripped as I continue working fitting more parts together.  Here's a picture of him before he was stripped down again... 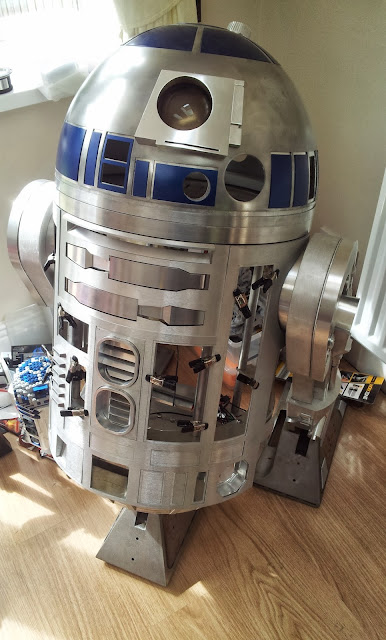 I'll take some pictures of the feet this week and upload them.

I have a video of the lights working.

More work on the dome

Lots of parts have come in and I've been busy putting them together.

Thankfully the feet came in from JAG as did the long awaited holo-projectors from Bob Considine. 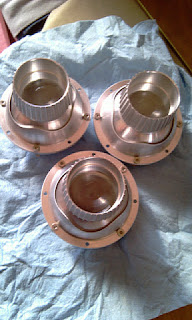 I got to work on the dome and started by cutting the inner dome for the holos and the logics.  This was slow going as I went the way of drilling small holes in the dome and cutting out the panels.  Then there was a lot of filing to do as the laser cut holes in the outer dome were slightly too small.  I eventually got the holos fitted along with the front logic surrounds. 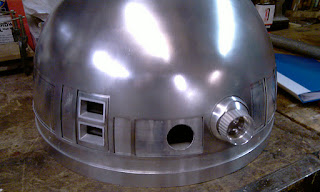 This took so long that I was put off for a while cutting all of the other panels in the dome until a friend of mine who owns a car repair and servicing garage offered to let me use his air driven cutting wheel. 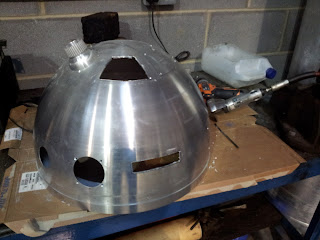 This cut into the dome like it was made of butter and in a couple of hours I had cut out all of the panels I wanted. 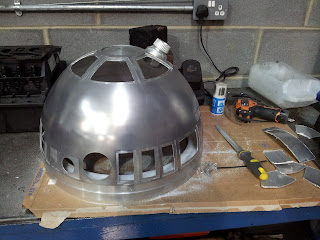 Now there is a lot of filing to do on the openings and on the panels that have been cut out as they will be used to bolt onto the hinges.  More on that later.
Posted by Unknown at 09:44 No comments:

Doing a bit of leg work

With the arrival of my wonderful booster covers from Guy Vardaman, it was time to build up the outer legs a bit more,  I've had my aluminium leg struts, made by Corellian Exports, for the best part of a year.  When I fitted the booster covers to the legs, I could see immediately that the leg struts were too long. 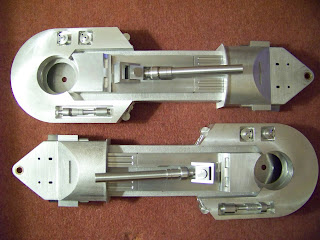 So I went to see Fred.  The only man I know who has a lathe at home and a lifetime collection of nuts, bolts, washers etc.  I went through his springs and found two springs that would fit inside the let strut.  We shortened the struts on the lathe and drilled and tapped the bottom to insert an M4 machine screw.  This is a picture of the broken down leg strut... 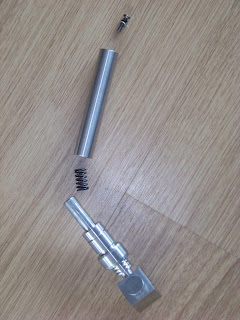 I can now build up the leg by bolting the bottom of the leg strut onto the ankle bracelet. 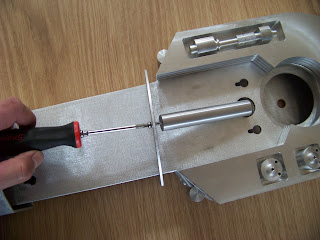 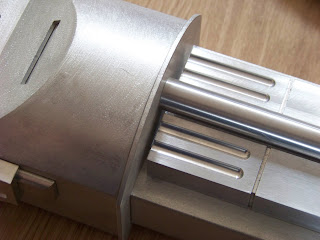 I then push the booster firmly down, loading up the spring and tighten the mounting screws from the rear thanks to Jerry's leg design, there are small access hole for this very purpose. 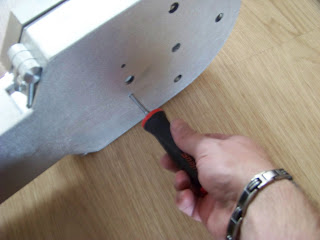 So the only thing that keeps the leg strut in place is one screw at the bottom and pressure of the spring against the booster cover.  This has the added bonus of keeping the ankle bracelet solid against the ankle.  Once this is on it really gives the leg a more complete look. 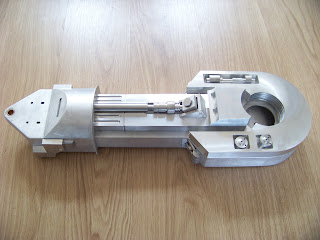 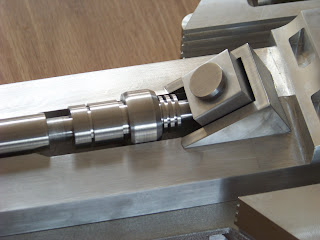 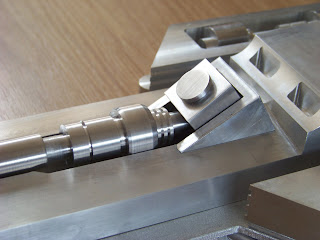 More parts in the front

Not a great deal of updates recently but I've managed to make some progress.

The Large Data Port (LDP) was fitted into the frame as was the utility arms and front vents.  I also fitted the dome drive and the ankle bushes in the outer ankles. 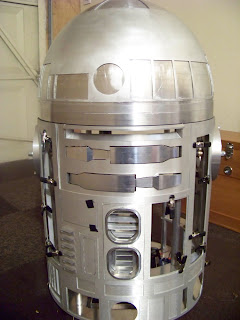 For the outer ankles, I put the bushes in the freezer overnight and before drawing them into place with some long bolts and flat washers, I heated the ankles in the oven.  The bushes didn't glide in but it wasn't too difficult and they're now in there to stay.

The dome drive has been fitted and the retaining spring mounted on a custom fitting turned by Fred. 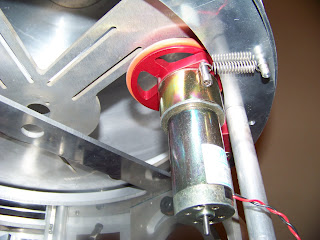 The LDP wasn't too difficult and is only held in with two M4 bolts.  There are many mounting holes provided on manufacturer Dave Shaw but they are only for options and two does the job just fine.

The utility arms were a different matter.  They are beautifully machined by Russ from RB Replicas.  Thankfully, the waterjetter, when I had my frame cut, had centered all of the holes from the original plans by Jerry Greene.  I remember when I first collected the parts, I wasn't sure what most of the centre marks were for but they've come in very handy.  After some brainstorming, we decided to cut a recess into the arm carrier frame to seat some brass bushes.  The next problem was to decide how to cut the flat-bottomed recesses.  I suggested that since the frame was made from aluminium and we only had to make four cuts, we manufacture a cutting tool to do the job.  Fred liked this idea and got to work producing a custom cutting tool from a piece of stainless steel. 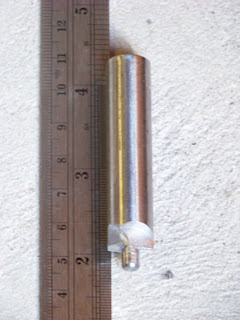 After the recesses were drilled we installed hinge bars though the utility arms and made the brass bushes. 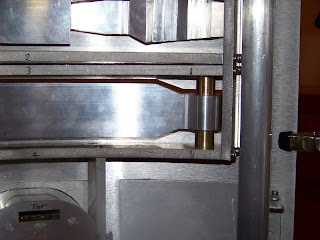 The parts that I've ordered and I'm waiting for are, Booster covers; feet; centre ankle; holoprojectors; foot motor drives; dome lighting kit; battery hoses; battery boxes and ankle cylinders.  There are now very few parts that I need for completion or at least the structural completion.  The work on the dome alone is enormous and will probably be my next mission.  Once I have all of the parts that need to be painted blue, I'll be going to see the painter and getting a price.

I've been ordering more parts and making adjustments where needed.  My leg to body hubs came from James (aka Commando8) together with a mounting bracket for the dome drive motor.  It took some adjustment to get the hubs to fit as the shin mounting blocks were in the way. 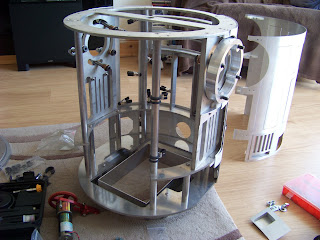 This is the dome drive motor.  I'm trying to make the wiring modular, hence the connector on the end of the cable. 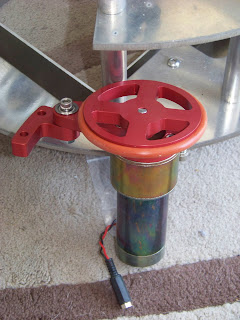 Trying to think ahead, I decided to make some wiring clips out of two different sized p-clips. I think they'll work out quite well. 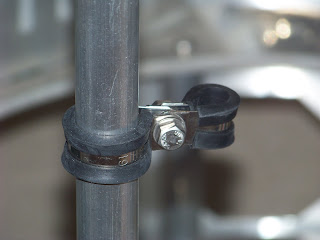 I ordered the NPC-2212 foot drive motors from www.Robotmarketplace.com and they arrived really quickly. 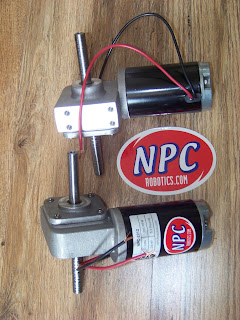 Finally, Jerry Greene sent out my outer legs and ankles which arrived today.  They are truly fantastic.  This is one of the legs after I've fitted some of the other parts to it. 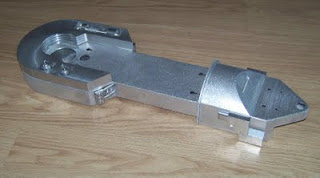 I've ordered some of the hardware to fit the ankles and shoulder horseshoes to the legs then I'll mount them on the body.  I also have to fit a mount for the dome drive spring to get that working then I'll be able to test the drive using the radio control unit.  That will be his first remotely operated moving part.
Posted by Unknown at 13:10 No comments: